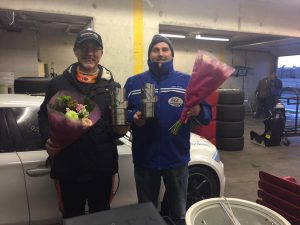 Einar Thorsen and Johan Jansen joined Cor Euser Racing for the first race in the Dutch Winter Endurance Championship, the Zandvoort 500. A 4-hour race in four divisions, the fastest in Division I, mostly Porsche GT3, and the slowest in Division IV, mostly BMW E30 325. We had entered the BMW E36 318ti in Division III, but it soon became clear that we were much too slow to be anywhere close to the mostly Renault Clio filled class so decided to be racing in Division IV instead.

Having set the fastest qualifying time of the pair, Johan took the start and on a wet, but slowly drying, track he made no mistakes and could hand over the car to Einar in P4 of 5 – a Porsche 944 has spun in the opening lap and had not yet caught us again. We probably did not minimise the pitstop time as we had to fill the tank after Johan’s 70 minute stint, but hey ho we were not expecting to win today so nobody were in a hurry.

Einar had the good fortune of finding a better and better dry line, so with that the laptimes also kept on dropping; always a couple of seconds slower than the 325s, but when the leading Golf and the chasing Porsche both suddenly needed 15 minutes in the pitbox for repairs, the little Compact found itself in P3! When Einar’s 70 minute stint was over, he came in for fuel and driver change, and the first Code-60 was called, good fortune! The Code-60 was however not called for clearing the track after an accident, it was called due to thunderstorms! All the track marshalls were collected and brought into shelter and the cars rolled around at 60 km/h. After 25 minutes Johan was smart enough to come back into the pits for the last driver change and Einar continued the Code-60 driving.

Finally the Code-60 was lifted and Einar could get back to race pace. However, with the track drenched from hail and rain, driving on cold intermediate tyres, and a 5-lap buffer back to the chasing Golf, he put safety over bravery and ignored mediocre laptimes and competitors regularly flying by to reduce the lead with a lap. In the end the P3 was not threatened and the podium celebration was genuine enough :-).

Thank you to the Cor Euser Racing crew that made this possible!