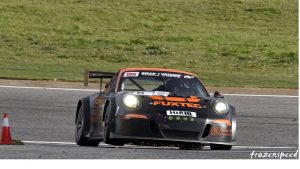 Leading up to the race, I had attempted to recruit a driver for a suddenly vacant seat in the awesome Fuxtec Porsche, but although the conditions were spectacularly good, nobody could be found – so I took the seat myself :-). Driving with Bugs Bunny and Oleg Kvitka is always exciting, so I was really looking forward to this. Decision was made too late to get any laps in the Friday practice, so first time in the car was for Saturday morning qualifying. A quick explanation of all the dials and encouraged by statements like “it’s easier to drive than the 997”, I headed out into the traffic in the most powerful car I had ever driven on the ‘ring. Two laps later I returned, reasonably happy, but with basically the same laptimes as in the 997 – not fast enough. Oleg on the other hand put in a few solid laps and we were suddenly 4th of 10 in class and 28th of 157 overall. 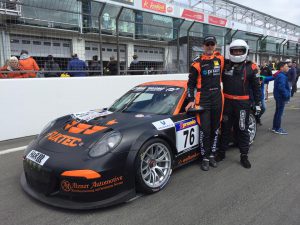 Bugs started, drove fast and safe, and handed me the car in perfect condition. I messed up the getaway after refueling, but once 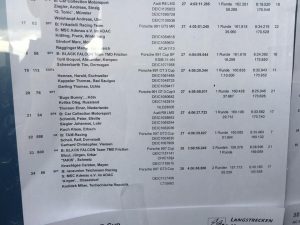 on track quickly got into a good rhythm. Passing the finish line after my first flying lap gave me a little shock; laptime was 20 sec faster than in quali! Then the next lap; another 7 sec faster! Man, this car IS fast and easy to drive! Then the usual double yellow code-60 misery started and I could not set any faster laps, but the smile on my face was big when I handed the car over to Oleg after 8 laps – the team was happy too, except with the getaway…:-). Oleg was flying and fighting for P2, but due to a conservative fuel strategy we had to make an extra pitstop that meant P3 was the end result, and P20 overall.

Adrenalin Motorsport had entered no less than 9 cars for this race: 4x Cup5 BMW M235i Racing, 1x V5 Porsche Cayman, 2x V5 BMW Z4, 2x V4 BMW E90 325. We were especially pleased to see the Cayman back looking its best after having been in a very heavy accident in VLN 2 only two weeks earlier. 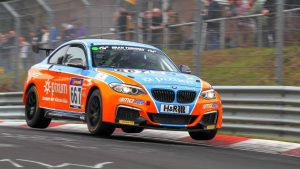 Most of the drivers have now got used to the thought of having a data analysis session on Friday evening, so there is plenty to do as the only data engineer. Fortunately many of the drivers now also look at the data themselves and are happy to just receive a copy after the race. A special analysis session were held back at Norbert Fischer’s place for the drivers of the team’s fastest Cup5 BMW M235i Racer; very nice that even these top drivers take the time to dive into the details and pick up a hint or two. 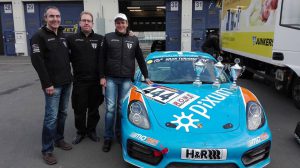