Adrenalin Motorsport had entered 7 cars for this race:

Special coaching sessions were arranged for Leisen/Trummer as the latter was also preparing for his WEC LMP-1 race the following weekend.

Also Miller/Bergstein were taken good care of and shown where and how to make their laps faster and safer. Unfortunately Bergstein was taken out by an overly eager Audi GT3 in the qualifying and although the team managed to repair the car in time for the race, he decided to leave the fight for podium to the other drivers on #668. 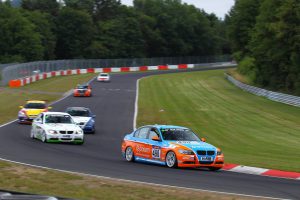 Picture shows the class winner #490 just ahead of his closest rivals.